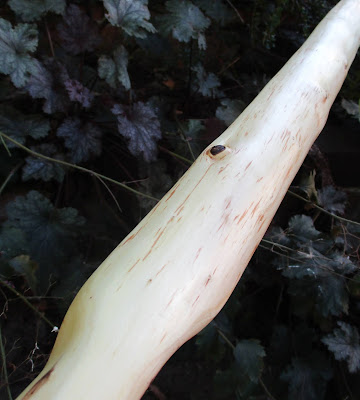 I've got it sanded, oiled and waxed, it looks really good, unfortunately I can't get it back to full draw myself, but hopefully it will get shot on Sunday.
It's rather handsome. 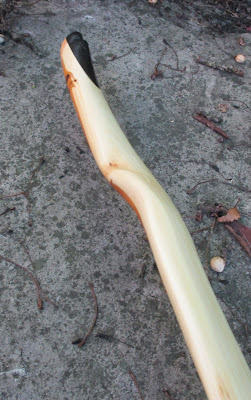 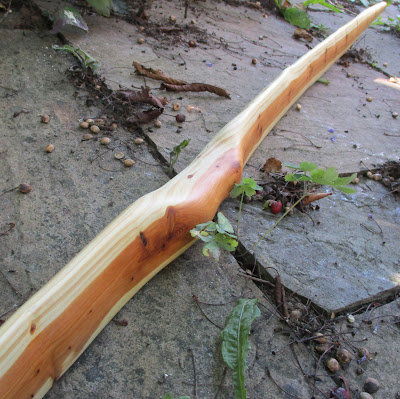 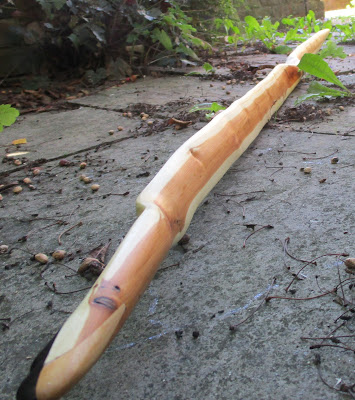 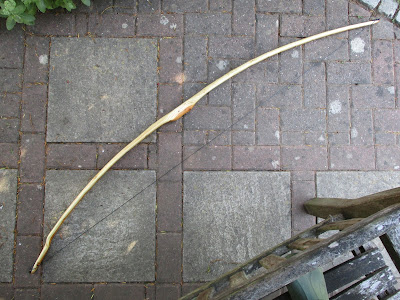 A mate of mine brought over a shortish but wide Austrian Yew stave, to see if I could make a 85# @30" primitive. I was a tad sceptical due to it being only about 71" long, mind being a wide flat design it should be able to cope. I'm just a bit nervy after the last one blew up! 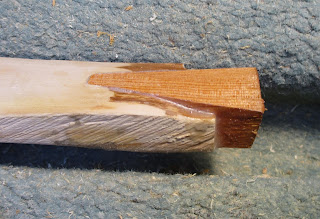 Anyway, it's back to about 80# @27" already. At one point I was considering laminating some short curved levers to add an couple of inches to each end and to give string lift at about 20" draw, however the bloke I'm doing it for didn't fancy that, so I'll save the idea for a later bow. It'll be a good use for thin Yew off-cuts. 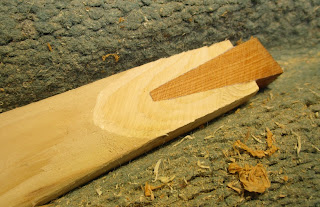 The bow has a very weird dip/bend at one end where it was beginning to fork, it'll be an interesting feature, but it's difficult to slim down without overdoing it and risking failure. The limbs were about 2" wide almost all the way up, a bit like the Meare Heath bow with pin nocks at the ends, but I'll gradually narrow it to a more graceful willow leaf sort of shape. 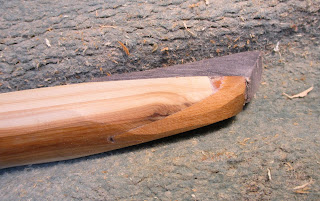 I've added a V shaped insert at one end where there was a manky ring and not much heart wood, that will just stabilise it a bit when narrowed, give a whisker extra length to make room for a stringer groove and also allow me to form a clean flat surface to glue on a horn tip overlay, which is fairly substantial.

The first 3 videos of the build are on my Youtube chanel "Del Cat" (no adverts on the channel...don't you hate the ads?)


Talking of Youtube, I watched one of my vids on our big flatscreen TV as it's available through Virgin media. It looked pretty good!
Posted by Derek at 10:03 2 comments: 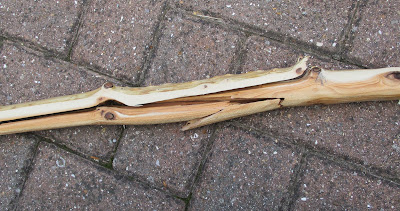 I've been working on a Yew stick bow (from a 2" diameter pole) I was doing it pretty much free hand just trying to use it as it came. I was aiming for 70# at 28" which was maybe a tad optimistic.
It was moving nicely, beginning to get the tiller looking nice at about 24" draw, low brace and 70#.
I'd just done some tidying up and was giving it plenty of exercise on the tiller when it went bang.
There was a big knot going right through the back at the arrow pass. I'd been hoping the bow was stiff enough there, but obviously no! The back parted, if I'd rasped out a scoop and patched over with clean sapwood it would have been fine.
Anyhow, I'm not too worried as it was just a quick experiment, and fortunately I hadn't wasted the time or effort of putting horn nocks on it.
I did a couple of vids, one during tillering and an autopsy!
https://www.youtube.com/watch?v=ynQa9JxAmJo
https://www.youtube.com/watch?v=HaxxoqOy9jU 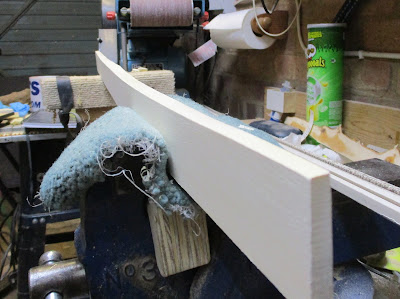 Meanwhile on the Primitive Archer forum, one of the guys in Wales was having trouble making a wooden crossbow prod, only a light weight 40# one, but they are tricky due to the short length and can easily end up too thin or too heavy and chrysalling on the belly. I said I'd see if I had any suitable off cuts, and found a nice slat of the Walnut that I cut with my brother back in January. I cleaned it up, sawed it to a thickness taper of about 1.6mm for each 6" of length and posted it off to him, there's a bit of deflex in it, but than can be a good thing IMO with a crossbow prod.
It'll be interesting to see how it performs, as it felt quite lively when I tested a small off-cut.
Posted by Derek at 17:28 No comments: 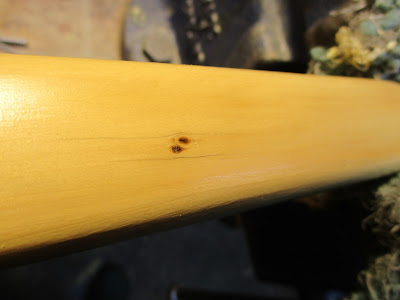 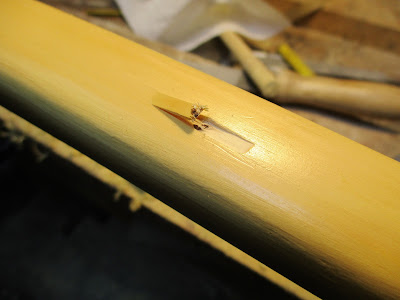 Blimey! The much re-built wonky ELB showed up last week with a tiny crack across two pin knots on the back. Originally the bow was warbow length and weight, but it failed at the splice after a good deal of use, I cut it down at the break, re-spliced it and made it into a lower weight ELB, still good for roving. It's good to spot these problems early, as left alone it could have resulted in catastrophic failure... and nobody likes that! 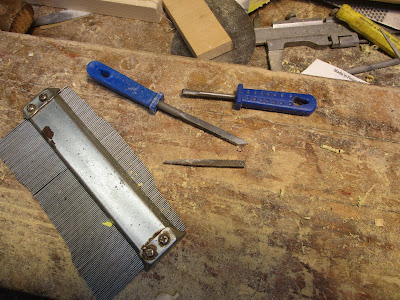 I carefully probed and lifted the crack to see how bad it was and stared to chisel it out with my little ground down needle files. Its hard to chisel it out clean straight and even width, so I ground down a square section warding file to clean it up. A set of warding files from Toolstation are cheap and very handy.
I cut some sapwood from an off-cut of English Yew and shaped it to suit, checking against my profile gauge for a good fit, this was glued in with Cascamite, a G clamp in the centre squeezing it down nicely and then one added at each end, the clamps were cushioned on the belly side of the bow with a block of softwood and a piece of carpet.

It was left over night, cleaned up this morning and tested on the tiller to 28", it all looks good, but will get a thorough test on Sunday. 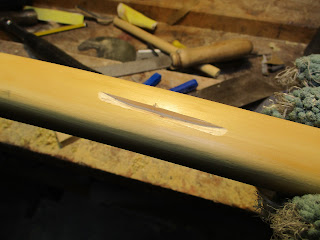 I've rather lost track of what I've done over the last week!
One of the guys at our rove asked if I could make him a 100# laminate. I wasn't very keen, but then remembered I had some relatively thin (~3/8"?) Yew heartwood billets glued up, and some Lemonwood, so I jumped to it and made a Bamboo/Yew/Lemonwood bow. The yew billets had a bit of a thin patch near the centre, so this was built up with a sliver of Pacific Yew that I had. The patch is just under the bamboo backing and it covers over the Z splice, that's quite handy as it allowed me to actually test the Yew core on the tiller, flexing it slightly. The point of that being to get the core tapered so that the Lemonwood belly can be a reasonable thickness and won't end up being feathered out to nothing at the tips.

It was all glued up on one of my formers that has a hint of reflex at the tips. To be honest I'm not so keen on that look now and probably prefer a hint of back set in the limbs which will give a 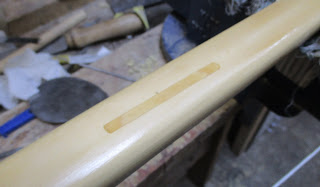 more arc of a circle tiller and not the stiff outers that the reflexed tips give. I just like the "full compass"look in a heavy bow.
Any how that bow was shot in/tested and approved last Sunday and I brought it back to complete the finishing, polishing the nocks, burning in the arrow pass and Danish oiling it. 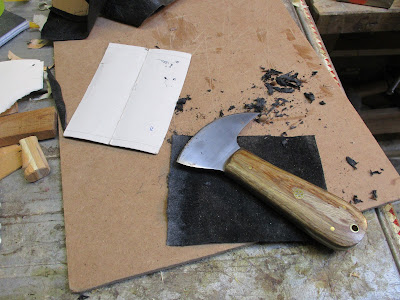 I did the arrow plate with Mother of Pearl and a nice black leather grip from a bit of old motorcycle jacket which is lovely leather. 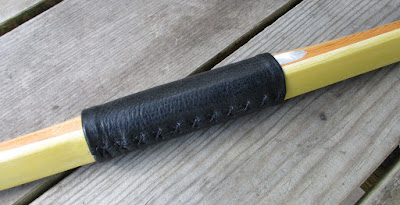 I used a new leather working knife which my son had given me for my birthday, it's really good, razor sharp and the solid grip allows a good pressure for a clean cut. The curved blade makes it easy to cut curves and also great for skiving the leather to a thin feathered edge to fold it over and glue (with UHU glue) for a neat rolled edge. The pic shows the skived edge and the thin card template I used to get the size and shape of the leather. The edges of the bamboo back felt a bit uncomfortable so I glued some thick leather to the back and pared it down to give a more rounded contour, the leather grip was then fitted over that.

PS. I've gone back to the old "classic" blogger, it wasn't perfect, but it was much better than the "new" version which wouldn't let me move pics within the text. 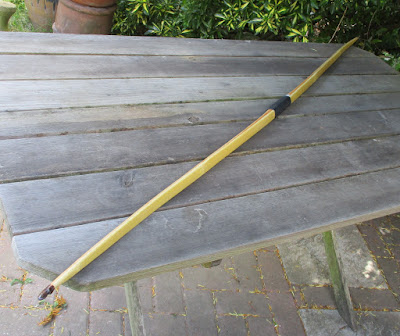 It just needs a leather grip, an arrow plate, another couple of coats of danish oil and some beeswax polish.
I've shot about 60 arrows through it and rounded the belly a tad more to get the draw weight down to just a whisker over 35# which will allow for some settling.
The two pics show the hint of reflex at the tips and the slim patch added to the core before the bamboo back was glued on, it was to allow for a tear out in the wood where the knotty area is. those knots and swirls look rather nice now it's sanded and had a wipe of Danish.

There was some discussion following my last Youtube video where I was measuring the draw weight. Someone had posted a video showing that brace height doesn't change draw weight, and that it's a myth. Another person disagreed and posted a counter video and asked my opinion....
Well, I thought it would change draw weight, but not by much... the first video was all done with glass faced deflex 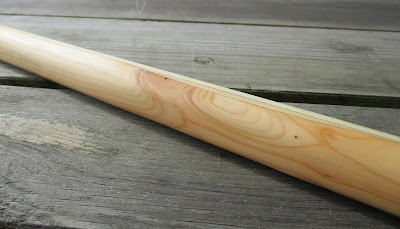 reflex bows which have force draw curves which  are less linear than a longbow, they are also capable of substantial overdraw and have high brace height.... not my thing.

You can draw your own conclusions and do your own experiments if you like.
My personal view is that realistic changes in brace height make very little difference to draw weight.
Mind, they do change the length of the power stroke.
Posted by Derek at 10:02 No comments:

I went out for a bit of roving which was most refreshing, not too hot and a pleasantly brisk wind.
I took the much repaired boo/Yew primitive to return to my mate JT who used for the rove. He felt it hadn't lost much weight and when we shot at the 240 yard mark (albeit with a stiff tail wind) he used some flight arrows and sailed about 60 yards past! So that proves the Titebond III word fine.
I shot My Ash backed Yew which is comfortable to shoot and makes a decent distance.

Meanwhile I've been making a 35# Boo Yew ELB for an old friend, it's at about the lowest weight I like to make as they are getting a bit skinny and twitchy if you go much lower. As it is I miss-read my scale and was pulling it to 45#, mind it was on a slack string, so no harm done. It's braced now and ready for the horn nocks and narrowing the tips.
I've done a couple of videos:-
https://www.youtube.com/watch?v=AKSRcSfu-9A&t=27s
https://www.youtube.com/watch?v=8L-SceJzYl4&t=173s