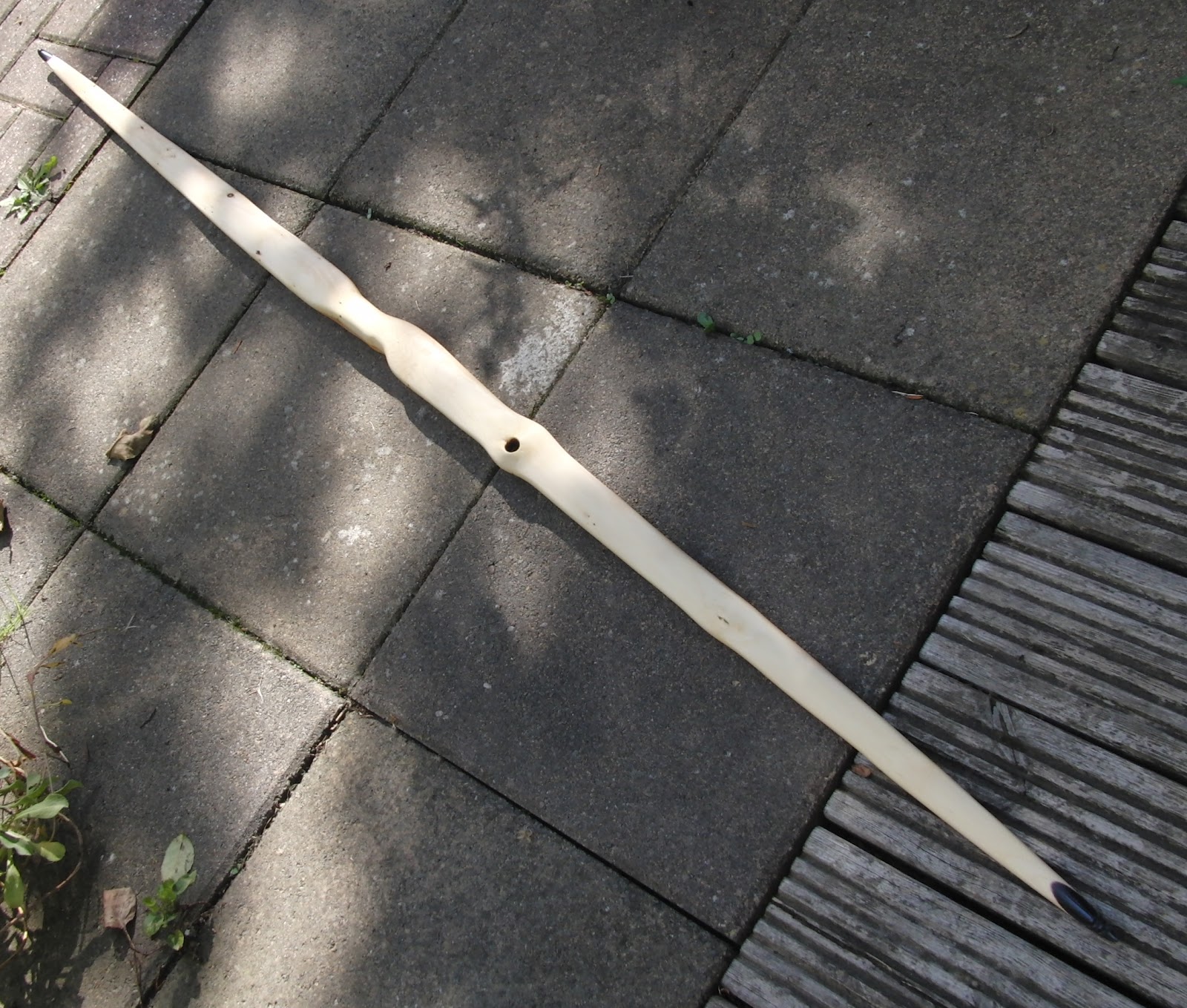 I spent a lot of time finishing it, but keeping it clean and simple. It's not easy to get good pics of bows due to thire long thin shape. Hard to get a foreshortened shot with it all in focus. 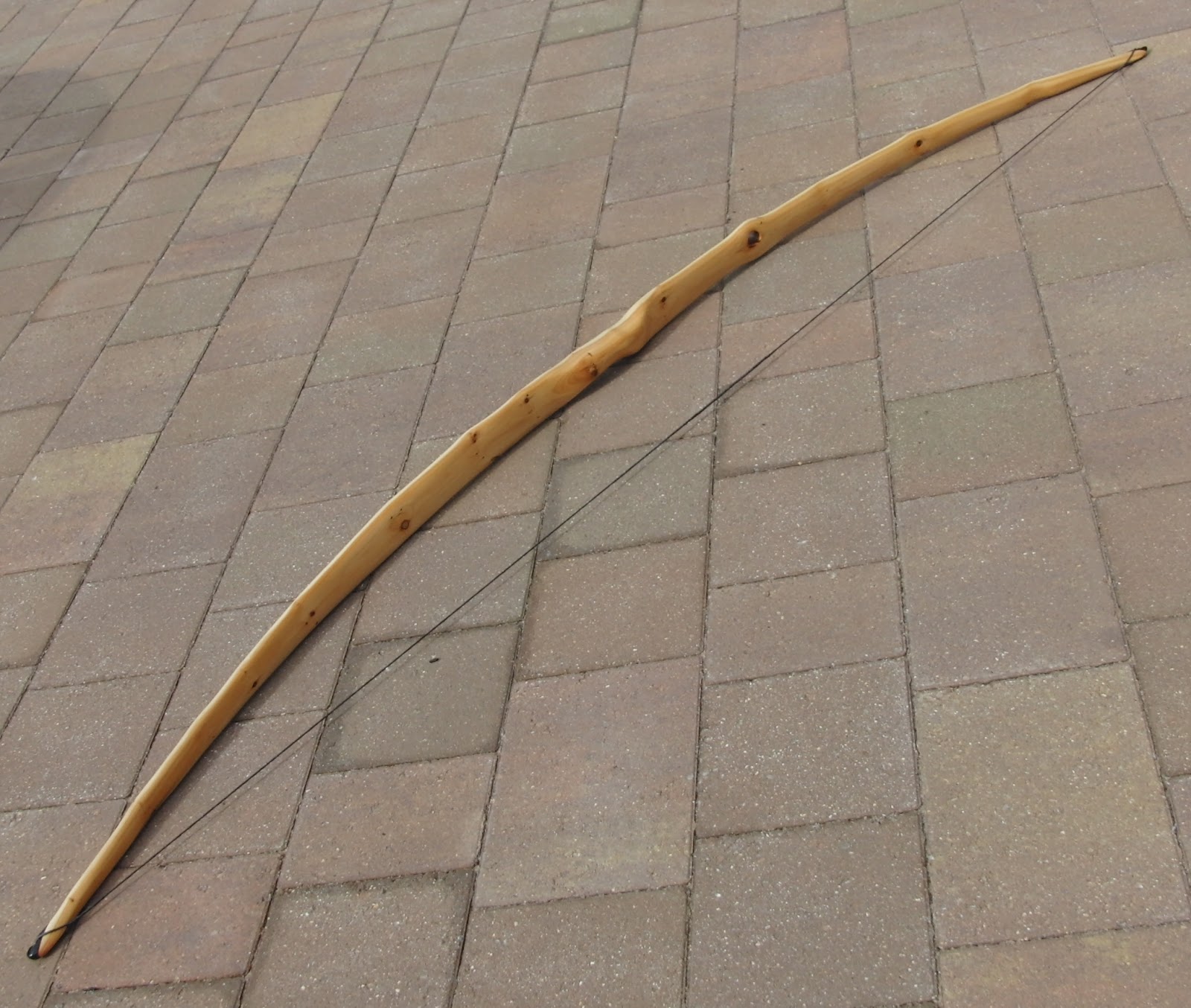 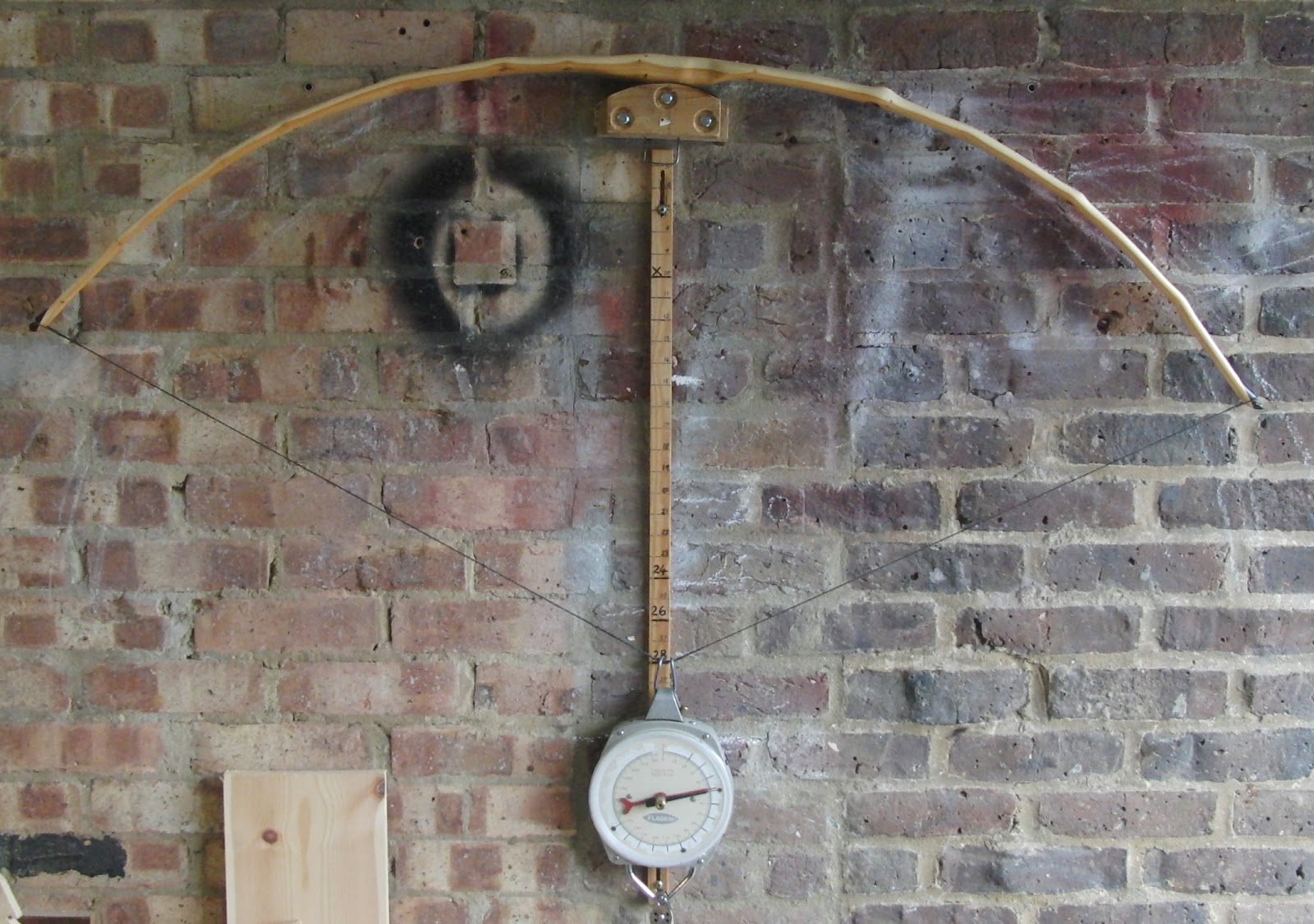 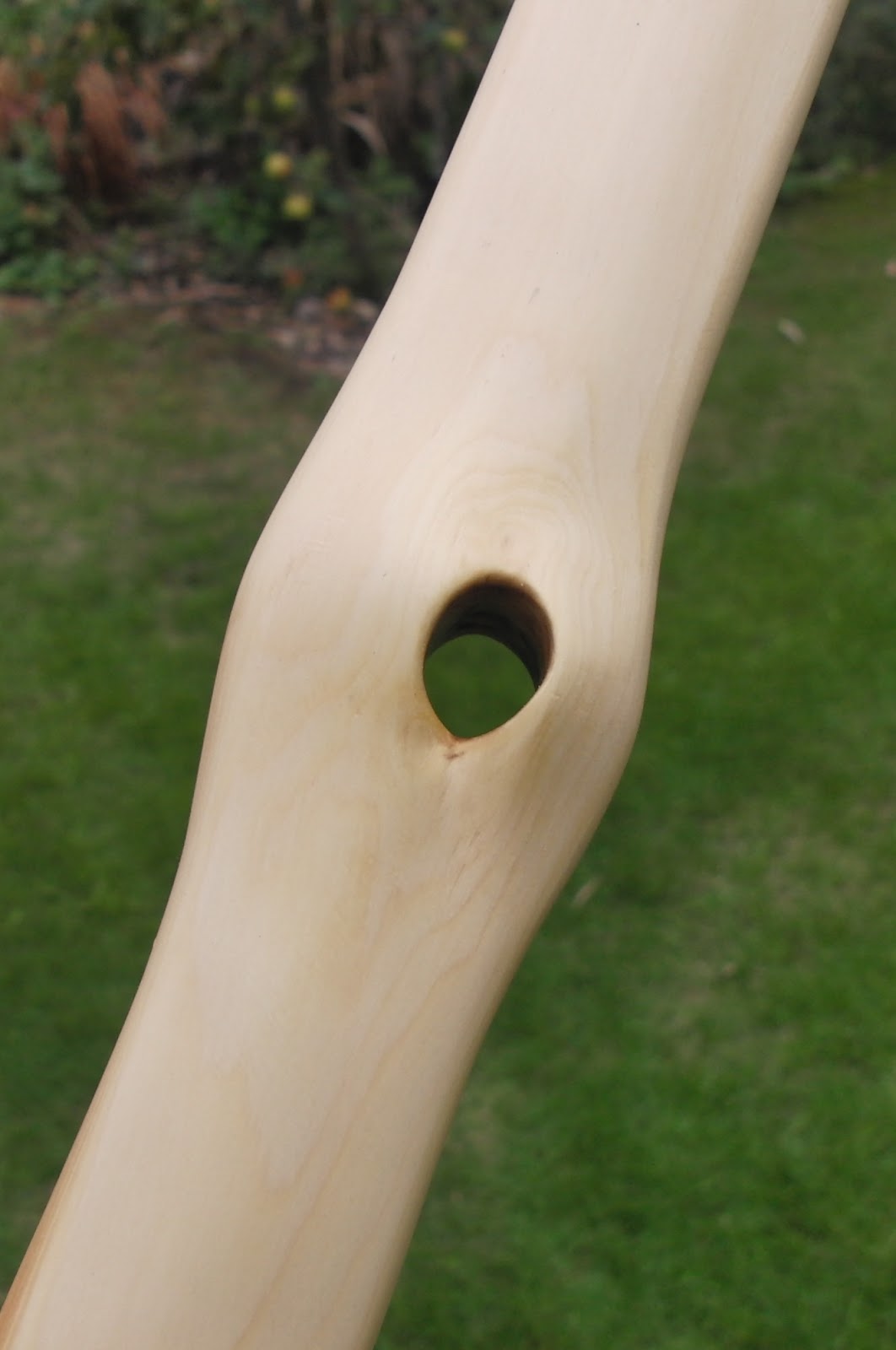 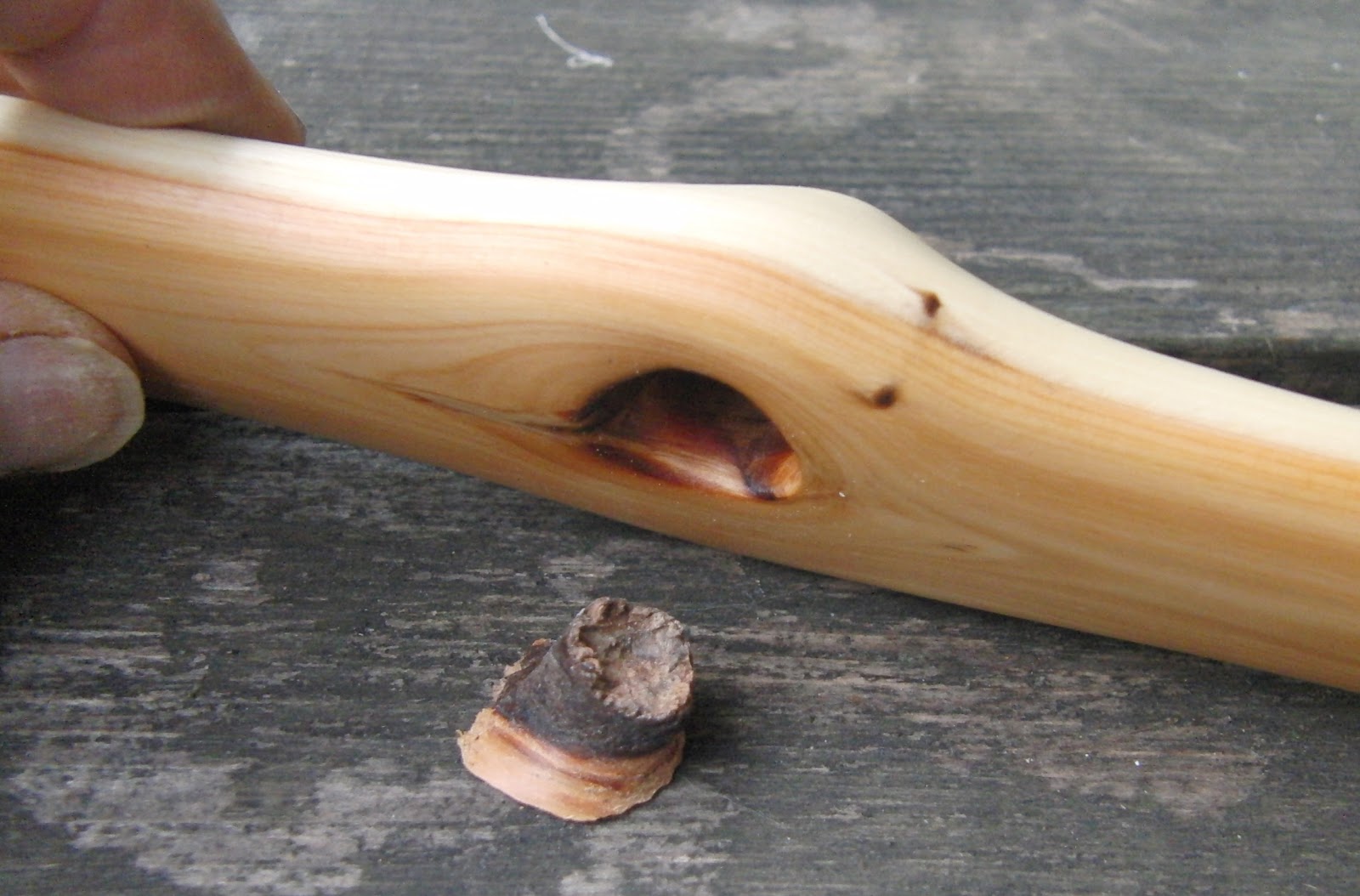 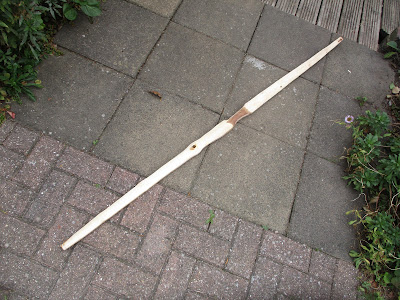 I came across this Yew stave in my stash, I'd obviously started to rough it out as a primitive at some point (it had 2019 written on it). It had some sideways bend which I straightened by steaming at the grip. Some twist in one tip was also steamed out. It's only just starting to flex, I'm aiming for 45# @ 28".
It has a big character knot in the upper limb, which I may take all the way through as the limb is slimmed down. I've also noticed the lower limb is a fair bit wider than the upper, so that needs some attention. 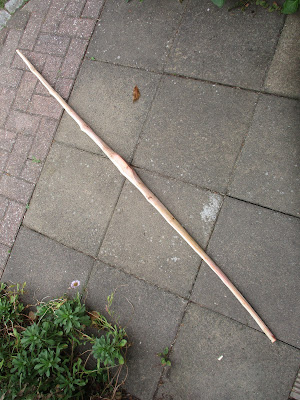 I'm really noticing the seasons shifting now, a softer warmth, a hint of chill some mornings, the courgettes are beginining to go over as the apples come to ripeness. 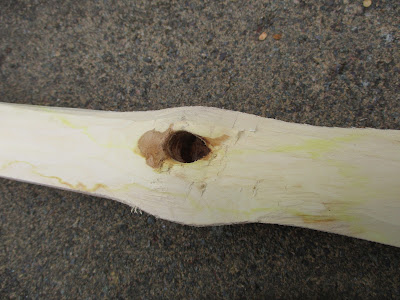 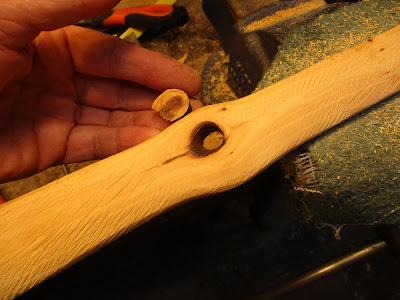 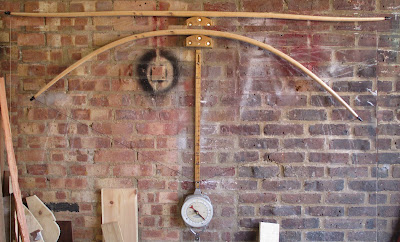 I've finished the Replacement for the bow that exploded, it's a whisker under 90# @32" draw.
Using Microsoft 'Paint' I've managed to produced a combined unstrung and full draw image.
I've sisnce taken a couple of scrapes off the ringht outer limb as it appears a tad stiff when I drew ellipses on the full draw image.

Someone suggested the tiller was odd and the outers are too stiff (I do tend to agree, but it was glued up with a hint of reflex)...
For everyone who says a whip tillered bow is fastest, someone else says a Mollegabet style with stiff outerlimbs is fastest. So make your own minds up and tiller accordingly! 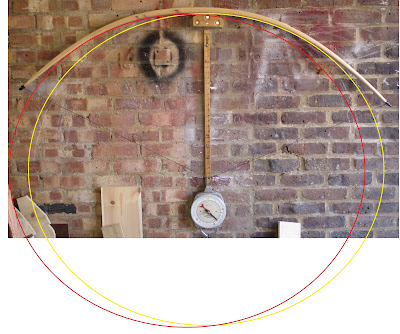 Bad day at the Office

I got the deflexed yew back to 70# @ 28" and took it roving on a scorching hot day. It felt punchy. One of the guys videoed me shooting it and I heard it creak... I inspected the back and couldn't see any lifting splinters, so next shot I pulled it a whisker more (maybe 29"? ... it was supposed to be 29" draw).. I thought, I'll hold it for a couple of secoBANG. It exploded whacking my right forearm in the process. 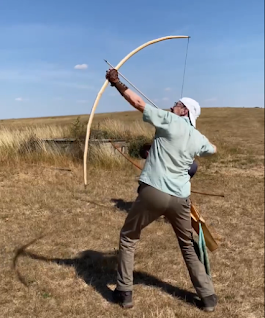 We collected the pieces and carrid on round the rove... nearing the end my cal suddenly went into spasm and I slowly limped off to sit in the shade and play my harmonica (that's not a euphemism) until every one finished. We then sat around chatting and enjoying a cool drink.
I think there were two problems whith the bow, a knot at the centre was much deeper than I suspected, but even if filled would probably have still failed. I suspect the real problem was the sapwood was too thin.
Being a small diametre stave (smallest in the upper limb) the back needed to be rounded to follow a ring, by flattening it a bit I left it V thin down the centre about 2mm. (see diagram).
To try and see if this theory is true I sawed some cross section through near the 2 main breaks. It seems there was plenty of sapwood at the grip, but it was thinner near the knot and at the other break... that's the problem with a stave , it's not nice and even so it's difficult to draw sound conclusions. 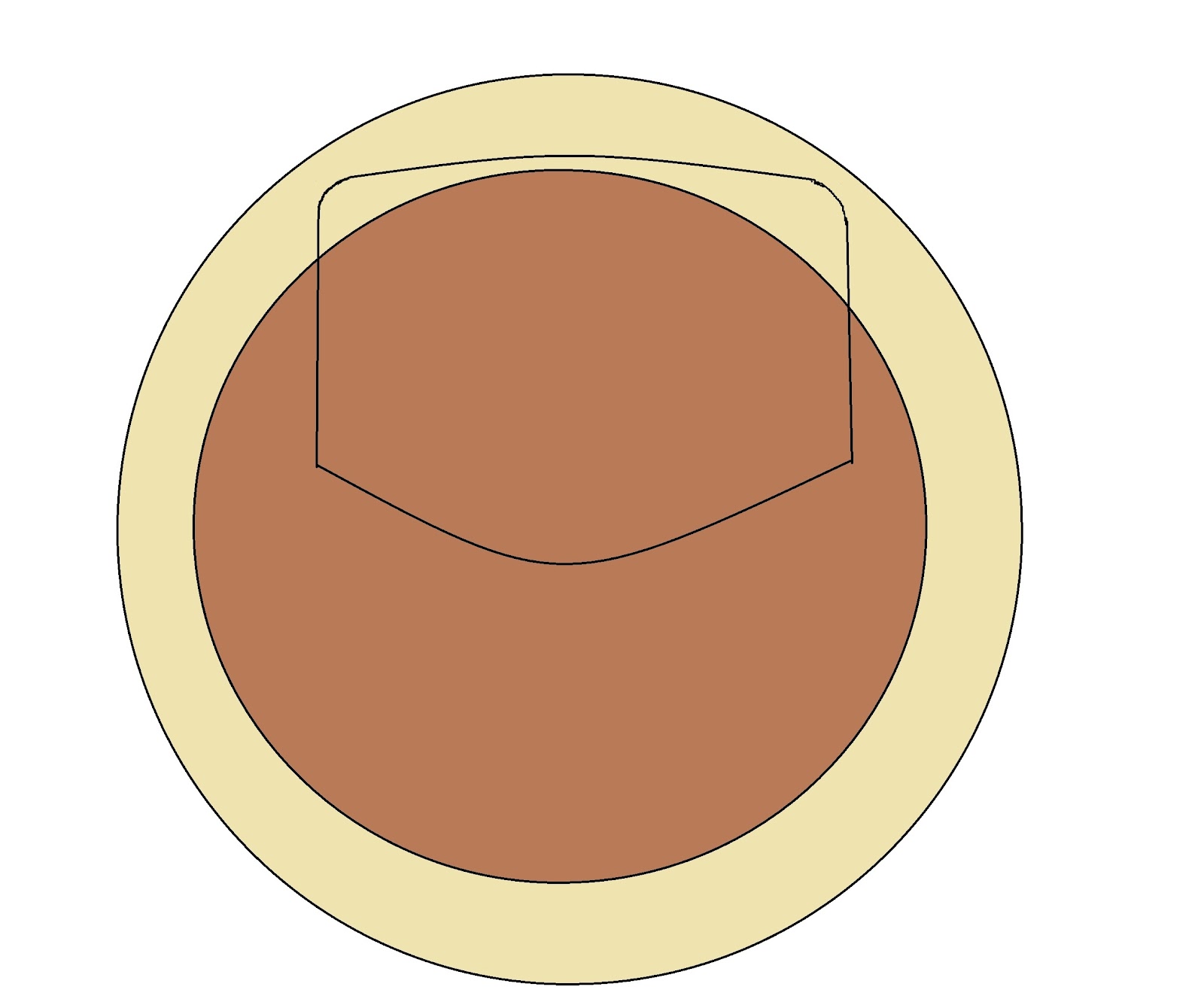 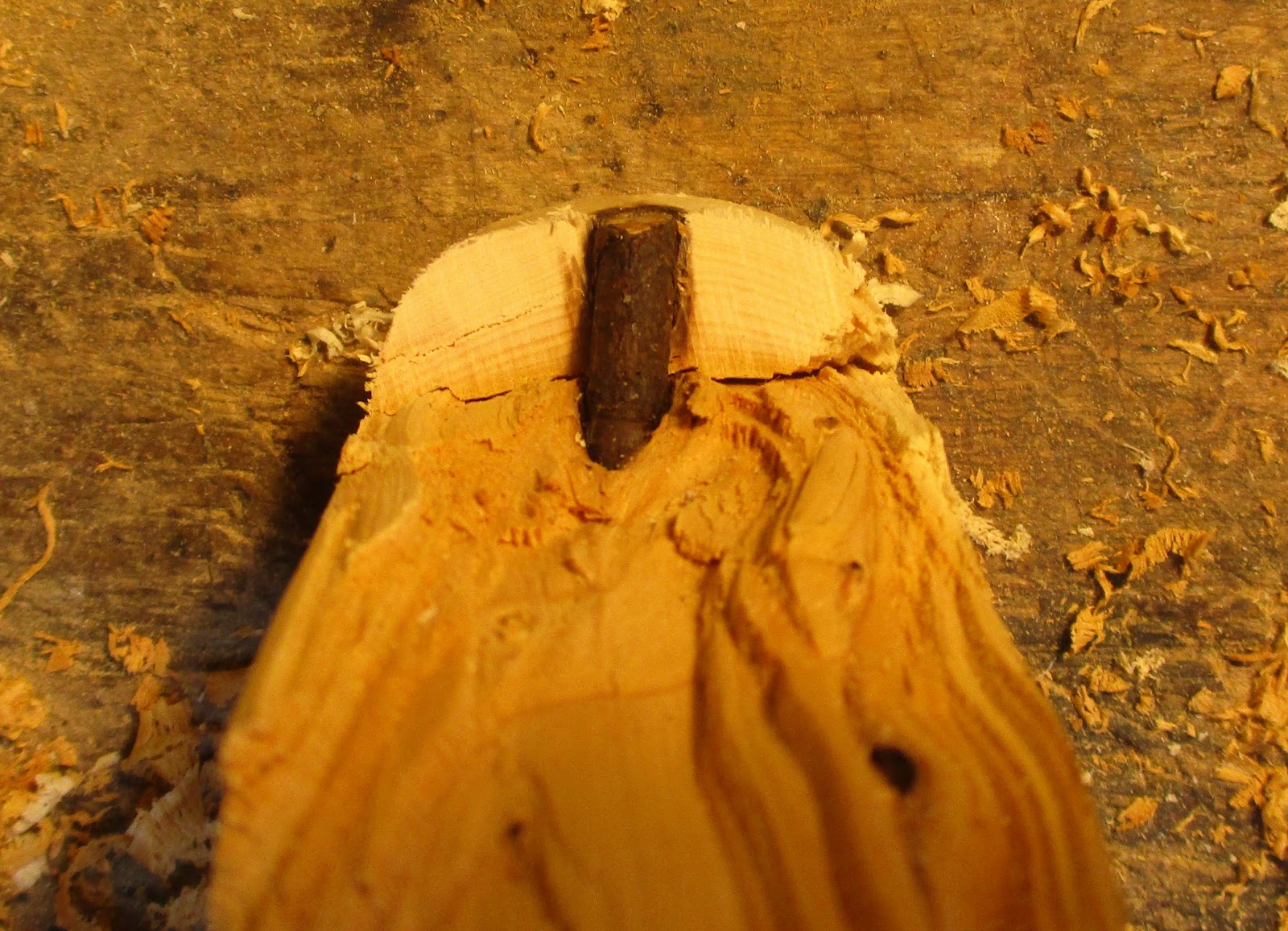 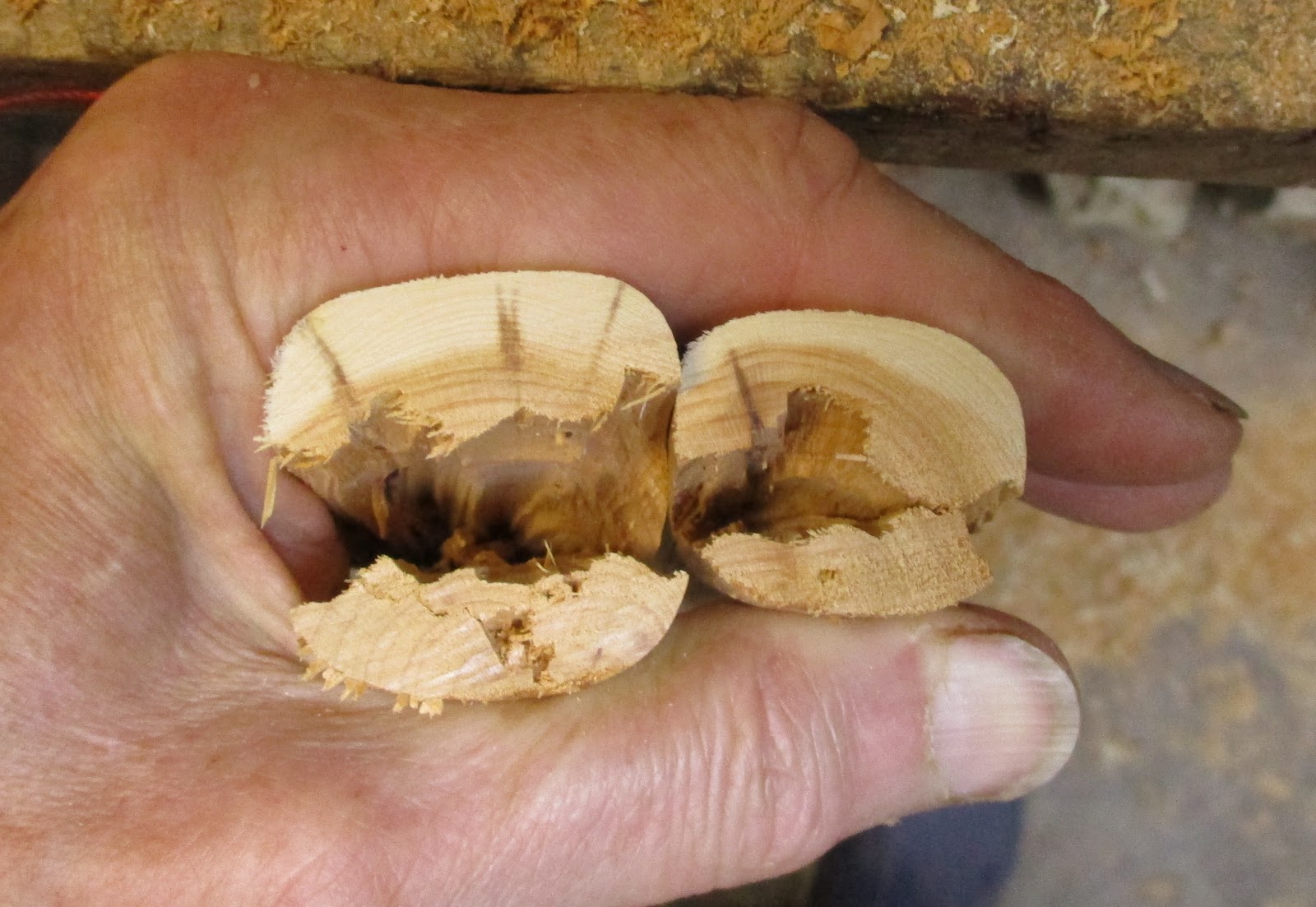 Tidy up and Deflexed Yew ELB

I had a sort through my staves to make room for the storm damage yew I'd just processed. The old staves were a bit of a rag bag mix, a couple of good ones, two that were just too skinny and bent and 3 staves of Elm. I'd had a go with one bit of the Elm previously, but it was too full of burrs, which looked good but were too unsound. I had a quick look at the best of the Elm, removing the bark, but it had a huge cavity and a load of burrs, so I decided to scrap all the Elm.
Whilst tidying I got chatting to my neigbour, who said he had a wood burner, ideal! I sawed up all the Yew off cuts and the scrap staves and left them in a plie in his garden for him, that saves me a tip to the trip.

One of the good Yew staves looked fine for a 70# elb, which my mate Rob had requested, he may well have given me the yew originally as the Elm which was on the same shelf was from him (the Elm was always "it may be ok, or it may be useless... worth a look".
The yew is from a fairly small diameter shoot/trunk/limb and has a good bit of deflex... 62mm from the floor to the belly at the grip, when placed with the tips touching the floor. It had been roughed down to appox' dimensions previously, so I just cut temporary nocks and tried it on the tiller. Plenty of draw weight to play with.
The sapwood is lovely on one side of the bow but slightly discoloured at one end on the other side. A bit of drawknife work on both sapwood and belly got the draw weight to 70# @22" with slightly taut string.

I then strapped the bow flat and heat treated the belly to try and remove some of the deflex. There was a good improvement with it being reduced from 62mm to 32mm, I may steam or heat a hint of reflex into the tips as they have a hint of ugly deflex at the moment.
I've had to plug a few knots too, but I'm faily confident it will make a nice 70# @ 29"

My Daughter told me she'd seen some fallen Yew near here. There's a copse of mixed wood with a lot of Yew and Oak which was once part of the grounds of a hall, there's a nice 12th C church next to it too.
A massive limb had come off an Oak, a decent sized Yew had come down too and taken a branch off another Yew. The branch was relatively clean, curved at the narrow end and straight at t'other. I took the straight end, there was a big pocket of rot at a union (where it braches) where I sawed it, the black manky rot ran down the central pith, but hopefully that won't effect the outer wood that I need. I got a lorry driver who was delivering a domestic appliance nearby to help me lift it onto the roof rack. It's gratifying when people are helpful. Having split it, I'm hoping there's a bow in each half (the 2 pieces on the right in the pic).
I returned the next day thinking I might try to split one of the big sections from the whole tree that had fallen. Close inspection suggested it was just too big for me to handle (14" diameter at the narrow end) . Underneath it was the next section from the tree which looked quite promising. The tricky thing was to roll the massive trunk off the piece I was after. I was working on a slope, so gravity and leverage got the job done.
I was careful to work from the uphill side, I didn't want half a ton of log rolling on top of me and breaking my leg.
The exposed log was rather knotty, but I persevered, trimmed it to length, and lifted it out with the assistance of a pasing 20yr old lad who lifted his end as if it weighed now't! 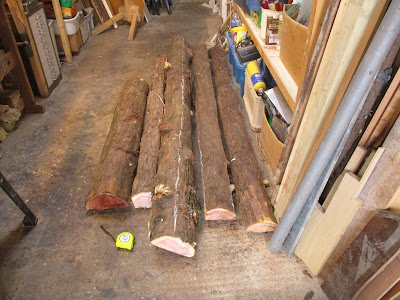 I split it in situ with axe, sledgehammer and wedges, carefully choosing a line which would hopefully yield a bow and some billets. It split very cleanly exposing the central pith. Another passer-by helped me get it onto the car. Once home I trimmed it further, I reckon there is one full length warbow stave (Chalk line in pic), a 66" primitive (2nd in from left, alredy narrowed) and at least 2 billets (shorter length on the left). Not bad for a couple of mornings work, which I enjoyed anyway, it also keeps me fit and out of mischief... though, doubtless some would call this little adventure mischief :-)

There are some videos on my Youtube chanel (Del Cat). "Yew Harvesting" "More Yew Harvesting" and "Looking Over the Yew Half Logs"
Note:- The copse is council owned and is on land open to the public. The timber had been cut and moved off the paths by the council and had been left to rot down. I have had permission from them to cut specific Yew before (https://bowyersdiary.blogspot.com/2012/10/applying-to-cut-yew-and-general-progress.html). However they are not interested in contacting me when Yew has been or is going to be felled. 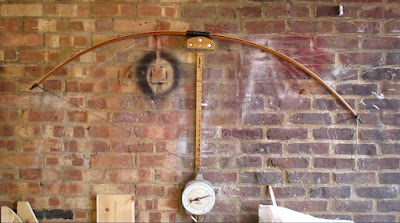 I've taken a bit of draw weight (~5#) off an ELB for one of the wonen from the ILAA, I've previously made her a bow, but this one is made by Neil Harrington I believe. It was slighty tired and had ben bumped about a bit having been lent to someone. I had a quick look at it on the tiller and saw the lower limb looked a little weak, so took about 4# off the upper and 1# off the lower. 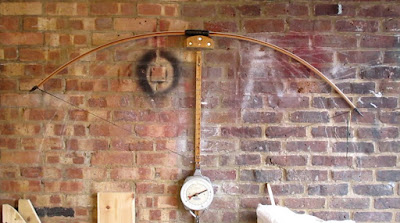 It's interesting to see other bowyers work and I was very impressed with this bow. It was built with a little back set (e.g the limbs are straight but andgled slightly towards the back from the grip).
It's Hickory, Purpleheart and Yew, but the Yew is made of two laminations, the inner one being tapered and the outer belly lamination being two lengths jointed under the leather wrap grip with a 5" scarf joint.
Another nice feature is the very narrow tips which are narrower than they are wide, this makes me wonder how they are fitted into the horn nocks which are normally drilled out round. I can only guess the nocks are warmed up to be fitted as horn becomes plastic when heated.
Anyhow the final weight is 40# @ 27.
Here is the before and after shot, it may look a bit subtle, but the lower (left) limb was originally slightly weak, which causes the stiffer right limb to pull down and tilt the bow.
The lower limb now looks a little stiff, but that is standard practice to allow for it being under more strain as it is slightly shorter (The gip has about 3" below the centre and 1" above). Note the lower limb has had a few scrapes off the corners of the belly since then.
Posted by Derek at 11:17 No comments:

Derek
I've posted hundreds of videos on my Youtbe Channel "Del Cat" . My old site is http://sites.google.com/site/delsbows It has loads of pictures a few videos, don't miss the Chinese Repeating Crossbow! And loads of stuff about bows.