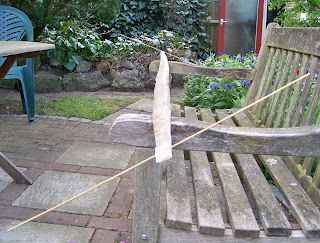 Here's the Hazel bow I made during the day at the Beltane festival.
It shows what you can do with a most unpromising stave if you start long and wide. I got it to 50# @26" on a low brace. It needs some cleaning up and fettling but it's interesting to note the huge twist and that it's retained some reflex.

It was a straight log but when split each half opens up to have a slight reflex. At the festival several people thought it was somehow put into the stave by me, or that the bow was going to bend that way.
Here are a few dimension.
69" tip to tip.
2"wide max tapering fairly evenly to 3/4" at tips.
Back of bow left with bark on and having the natural curve of the log, about 15mm thick mid limb. Grip section 5.5 - 6"

Meanwhile I had another bow to reduce, it was supposed to be 70# at 28".
Yet having spent about 2 hours rasping off copious amounts of wood from the belly and side of the last 1/3 of each limb it final got down to.
.
.. 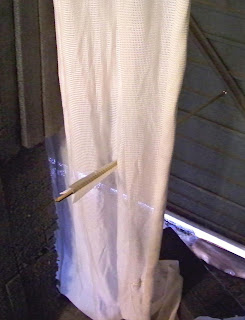 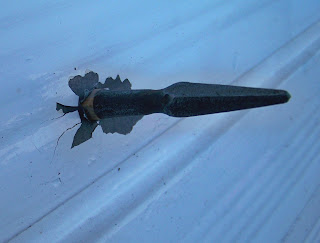 ... 70# at 28" !  I think it was hugely over weight originally.
Initially I hadn't bothered weighing it at 28" as I'd seen it hit 70# well before that.
I just took wood off by degrees until it was just about manageable for the archer.  I'd just about reached the point where I wasn't happy to take off much more.

It was a relatively cheap Sycamore longbow, very long and a bit bulky at the tips and nocks.
Hopefully the archer will now be able to reach his full draw and the bow will have much less tip mass, with luck it won't have lost much speed, and I'm hopeful he'll be able to shoot his heavy medieval style arrows a bit further.
Talking of which...

Derek
I've posted hundreds of videos on my Youtbe Channel "Del Cat" . My old site is http://sites.google.com/site/delsbows It has loads of pictures a few videos, don't miss the Chinese Repeating Crossbow! And loads of stuff about bows.