Dealing with the Dip 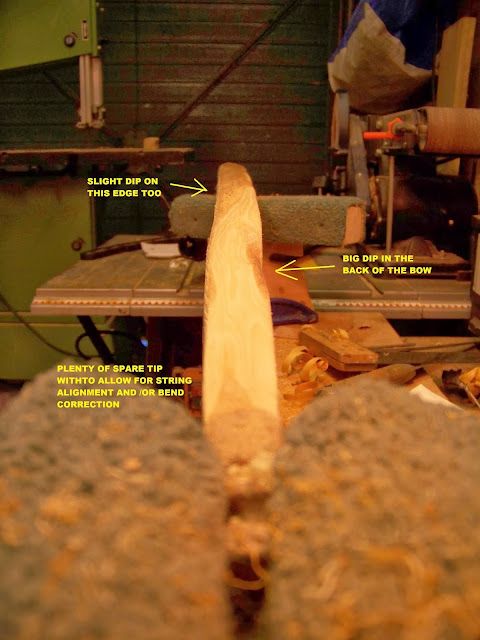 I've been looking over the bow and wondering quite how to progress, it needs probably about 1/8" off the whole belly, but it would be a fool who just set to with a spokeshave and did it.
The outer 1/3 of each limb needs to start flexing, especially the limb with the dip along one edge.
Working on that dip, I've taken some off the high edge of the back and carefully tried to blend it so that it generally follows a ring.
The pic shows the general  slightly S shaped effect where I've thinned the sapwood. It's rather a dim pic, but that's to try and show the grain, it's not finished as the rougher look helps to show what I've done. The dip on the right edge is plain to see, and you can see I actually let the tip of the bow waggle very slightly to the left to try and lose as much of the dip as possible. With a lower weight bow I may have allowed more waggle of even gone for a complete character bow look... mind a lower weight bow would have been shorter and half the problem may have disappeared off the end of the bow. Ah! No point getting distracted with 'what ifs' let's worry about the actual bow I'm trying to make.

I've been fiddling and fretting over it using a scraper too mostly near the outer 1/3 of the limbs... it's far to early to be using a scraper really, but I'm trying hard to keep the integrity of the back where possible, although I've continued the sapwood reduction right out to the tip now. No point having extra layers of sapwood for the last 3 inches!
I'll doubtless get it on the tiller again. If there's much change I'll post a pic.
Interestingly the cambium has popped off in parts of the dip, I feel this is a good thing as it shows there is some flexing there. The cambium layer is a bit like having a load of stain gauges over the back, when a bit pops off you know it's being stressed!
Much better to be going too slow and using a scraper than going too fast and wrecking the bow...
When in doubt, take some pics, come indoors, write up the blog and have a cuppa! 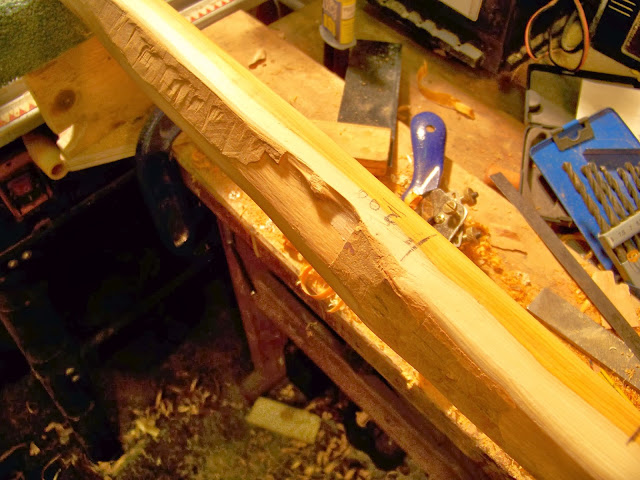 See this blog entry http://bowyersdiary.blogspot.co.uk/2013/10/yew-warbow-stave_31.html for a side on view of the dip, to really appreciate the problem.

Update:-
Now back to 22" at 130#
Where some cambium popped off it's revealed a nice little raised pimply feature in one of the dips in the back of the bow.
200mm out from the centre of the bow.
Posted by Derek at 09:48