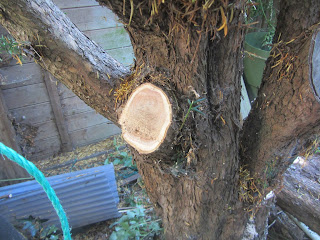 All this is my opinion of course, but I generally try and back it up with evidence.
You will doubtless hear endless people pontificating about the properties of Yew, fine grain, coarse grained, pale, dark, high altitude, thin sapwood, fast growing, slow growing, "landscape Yew" etc 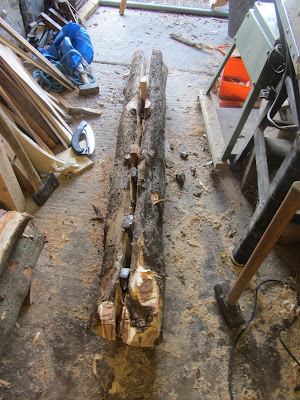 I'll tell you a story and let you draw your own conclusions.
Are you sitting comfortably? Then I'll begin...
Ages ago Les a nice bloke at the club said there was a Yew in the back garden of his parents house, which he was clearing for sale as they had now died. 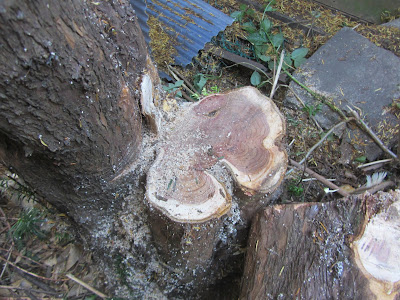 This is in Enfield a Northern suburb of London (very low altitude!) in the back garden of a terraced house. He said it hadn't been there when he was a kid, so it could only be about 50-60 years old maximum. Well I wasn't very hopeful and was a bit lukewarm about the whole idea. I met him again a couple of weeks ago, he mentioned it again, so Stuart, who is into Native American (NA) bows and I went over to have a look and see what we could cut.
Les and his wife were over there to let us through the house into the back garden. Us three blokes set too and managed to cut some decent wood and actually improved the look of the tree! 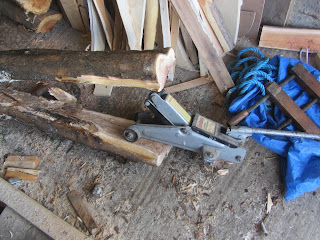 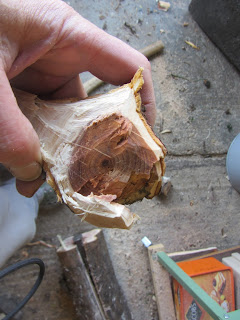 We got a decent length for a longbow/primitive/NA bow, one long skinny bit for a stick bow, (all for Stuart as he tries to avoid power tools) and a short wide trunk which will hopefully give me two matched billets, which will need the bandsaw to cut 'em out.

The big chunk of trunk took 3 of us to carry it through the house and into the car. I managed to drag it out of the car on my own and I've spent most of the afternoon splitting it.
I ran my circular saw along it first to try and encourage it to split along the line I wanted. It was hard work and I had to stop for a glass of beer once I'd got the split along one edge. To actually separate the two halves I enlisted the help of my trolley jack.
Tomorrow I will see how many billets I can get out of it... too tired now!
The heartwood is a lovely rich chocolate brown and the sapwood is relatively thin, yet the rings are coarse as it was fast growing... it would have been tempting to expect pale heartwood, and thick sapwood.
This just goes to show, the only way you'll find out is to saw into it, and anyone who says dark heartwood is only found on slow gown high altitude Yew is a fool or a charlatan, or maybe both!
Enough chat, I'll let you look at the pics.
Mind we won't know what sort of bows it will make until it's had a year to season.

While I was there Les gave me a few other bits from the old shed, some old tobacco tins, a wooden screw clamp and some lengths of aluminium angle, it was reminiscent of sorting through my Dad's tools and stuff. I think it's always nice to use bits and pieces rather than seeing them thrown. The tobacco tins will be very handy for my lathe tools etc.
I also picked up a length of skirting board from the junk pile as it looked to have good straight fine grain... might make some non-exploding flight arrows?!